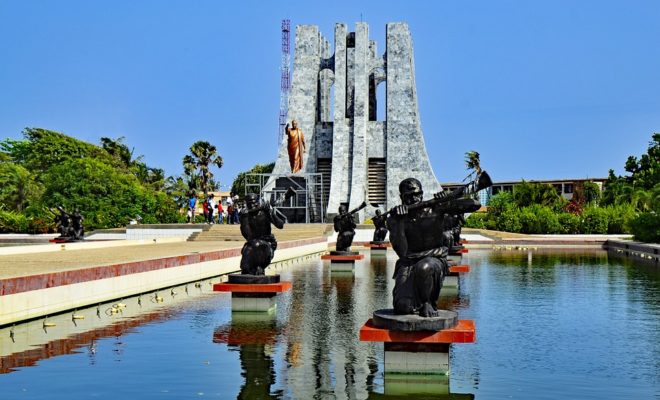 Industrialized and emerging economies are much more concerned about people’s creativeness and ingenuity towards entrepreneurial enterprises to reduce unemployment and other societal challenges.

Entrepreneurial spirit has been lauded by many as the creative juice for many. Not to overstate that the world’s wealthiest person started out his business in the garage of his home a few years ago and that garage business has grown into a multi-billion industry, Amazon.

The great many of technology companies globally have been conceptualized, owned and managed by entrepreneurs, entrepreneurs who had ideas but perhaps not financial support. Entrepreneurs are the future for economic development especially for local communities, many of whom will not have the where-with -all walk into a financial institution with collaterals, assets for risk aversion and other requirements.

There are innovators in Ghana who are making waves in the technology and science field but there is a tried-and-true industry that has been the savior for many economies, the hospitality and tourism industry.

Entrepreneurship is viewed as a significant agent of social and economic change for communities and society at large.

Tourism entrepreneurship plays a major role in contributing to fiscal growth thus increase in gross domestic product as well as creating employment while widening income generation base for community inhabitants Socially, tourism promotes re-distribution of income and wealth within the market economy through knowledge and skills sharing that can be exported to create a culture of tourism thereby satisfying needs of individuals or groups of people in underprivileged communities.

Internationally, the tourism sector is dominated by driven small businesses that provide goods and services to people (tourists) visiting certain destinations. One of the great things about the tourism industry is that it is a person-to-person contact industry even with the rise of technology and when we are talking about people, the continent of Africa has people.

Tourism in Africa was on the rise until the global pandemic hit. To underscore the point, the North-African nation of Morocco ranked first among the African countries with the most international tourist arrivals, accounting for 12.29 million arrivals in 2018; following in second place was South Africa, which received around 10.29 million arrivals.

Kenya’s 2018 tourist arrivals grew by 37.33 percent from the previous year to cross the two million mark for the first time, posting a significant growth in earnings to Sh157 billion. The earnings were a 31.2 percent improvement from the Sh119 billion earned in 2017, according to Tourism Cabinet Secretary Najib Balala.

In 2019, Ghana was the place to be. A strategic decision by the government acknowledging the 400 years of the arrival in 1619 of the first 20 enslaved Africans in Jamestown Virginia, dubbed “year of the return”, getting black people back to Ghana, from all indications a success.

As a “Diasporan”, with roots and interest in Ghana, I am sure tourism planners have had a chance to strategize with local communities as to how to scare prospects.

The year of the return is just one example of the potentials of tourism planning strategy. The question is, are practitioners of the industry actively planning or improving on their plans to get a piece of the tourism pie at the community level when the industry emerges?

From unofficial reports Ghana generated over $1.5 billion. Even though the sector has been dramatically affected, tourism will rise again.

According to the World Travel and Tourism Council (WTTC) in 2017, travel and tourism accounted for 10.4% of total global GDP and more than 313 million jobs (including direct, indirect, and induced employment) at 9.9% of total employment globally.

Direct travel and tourism employment in Africa rose to 9.3 million (2.6% of total employment), with 6.8 million jobs in sub-Saharan Africa and 2.5 million jobs in North Africa in 2017. This is an 11.2% increase from 2016. Globally, tourism accounts for 3.8% of direct employment as a percentage of total employment, compared to 2.6% in Africa, 4.4% in North Africa, and 2.3% in sub-Saharan Africa. Nigeria, Egypt.

In 2017, total tourism employment in Africa also experienced a steady rise, where travel and tourism jobs accounted for 6.5% of total employment or 22.8 million jobs (including direct, indirect, and induced employment); this breaks down to 17.2 million jobs in sub-Saharan Africa, and 5.6 million jobs in North Africa.

It is projected that, by 2027 South Asia will be the fastest growing sub-region with 9.5 percent and India 7.5 percent total contribution to GDP. Tourism industry creates more employment opportunities, a million of people in India who capable in the industry creates approximately 47.5 jobs directly and about 85 to 90 jobs indirectly.

As travel and tourism industry gain popularity, greater percentage of people in different parts of the world choose to engage in tourism entrepreneurship due to its flexibility and several benefits thereby changing socio-economic environment of the local communities positively.

With growing unemployment in Africa, especially amongst the youths, tourism can accommodate a wide range of job opportunities from technical, soft skill, to unskilled, rural, semi-urban, and urban areas. The United Nations World Tourism Organization (UNWTO) in 2016 predicted that tourism arrivals in Africa will reach 134 million by 2030, from the present-day level of around 62 million.

The projection/outlook for the continent of Africa is amazingly bright for this decade. If the projections hold true, this benefit will be a game changer to the economic and social development of Africa, Ghana; the standard of living and economic standing of millions that will benefit, from rural to urban communities.

However, when local communities hear of massive GDP outputs, job growths and economic developments, sometimes these local individuals take a keen look at their own day-to-day living and ask the question as to where the impact is being felt and why not them. Suffice to say that community tourism can answer this question with a direct on-the-ground multiplier effect.

The Secretary General for the United Nations World Tourism organization Mr. Zurab Pololikashvili said, “Governments across the continent are prioritizing tourism in their overarching development agendas, improving the business climate for tourism, and encouraging investment in infrastructure and hospitality.

Africa is embracing nature and wildlife tourism, international brands and technological change, with social media and online booking on the rise. Crucially, the continent is also fostering cooperation in the name of sustainable tourism, especially through public-private partnerships.” The pandemic has altered plans but will never destroy an industry that is the number one global employer, it might be down at the moment not out in any way.

There are many benefits to community tourism for entrepreneurs in Ghana:

2.Preservation of culture and heritage;

3.Multiplier effect of money in the local communities;

4.Entrepreneurs get a chance to control and execute their own ideas;

5.Minimize reliance large investment institutions who sometimes steal the ideas presented and then execute themselves; and,

Ghana is rich in culture, heritage, spiritual and ancestral connections. Many traditions known in many tribes hold naming ceremonies. Beside this experience, tourists would learn more about cultures based on the sites they see, food that they experience, language that they would hear and try to understand, and to stand and steer out at the roaring Atlantic Ocean, pondering on the voyage of many of our ancestors.

Local communities are where entrepreneurs are born and can thrive if they are willing to see that the tourism industry can present such an opportunity.

There is a large PIE, the TOURISM Industry. There is a call for leadership who sees this as a strategic imperative to use this moment to be intentional. Entrepreneurship builds communities.

1 thought on “Community Based Tourism: Strategy for entrepreneurship, community development”

Manage Cookie Consent
To provide the best experiences, we use technologies like cookies to store and/or access device information. Consenting to these technologies will allow us to process data such as browsing behavior or unique IDs on this site. Not consenting or withdrawing consent, may adversely affect certain features and functions.
Manage options Manage services Manage vendors Read more about these purposes
View preferences
{title} {title} {title}